Paint By Numbers? Be Unique! 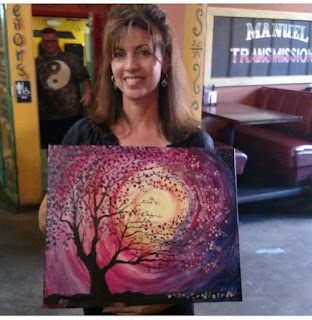 Paint By Numbers? No Thanks. I'd Rather Be Unique

Recently, I was invited to participate in one of those painting parties. Have you ever heard of them?

It's a party that consists of attendees painting a painting based off of the teacher's sample painting. It's a fun social way to be creative while eating and drinking (wine at some parties...)

I've seen the final product of these parties on social media and the one thing I noticed was that all the paintings look the same. So, before I arrived at the party, I thought about what I would paint.

At the party, I began filling my canvas with the bright colors of a sunset while the instructor taught about the brushes and mixing the paints. I have a degree in visual arts, so, as an artist, I already knew about mixing paint and using the brushes. As I filled my canvas, I felt  like a rebel going against the grain. It felt fun to be different. It felt great to be unique.

After a while, the other attendees walked around the room and when they came to my painting, they stopped and studied it. 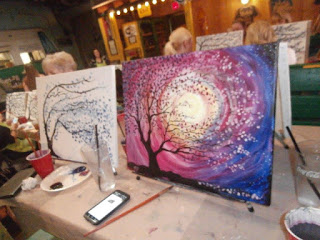 "I didn't know we were allowed to do something different," one lady said.

Isn't that how it is? We go through this life thinking we have to be exactly the same as the other women around us. We frown upon women who dare to go against the norm.

Why are we women, especially CHRISTIAN women, so hard on each other? I really want to know the answer to this question. I mean, shouldn't we encourage one another instead of tearing each other down?

I lost many Christian friends when I revealed that I was not a virgin on my wedding day.

I was told I was selfish for not having more than one child (without being asked why I only had one child. Had this woman asked, she would have learned that God only allowed me to have one child...)

I have been judged for working outside the home.

I have been judged for...gasp...bottle feeding my son instead of breast feeding him. Oh the horror!

Why do we do this to each other? Where in the Bible does it say that we women have to be exactly alike? I have studied the Bible many times and never saw that verse anywhere.

Instead, I found a verse that says we are to be the same as Christ who sought out the broken, flawed, and despised people of the world.

Take Ruth, for example. Ruth was a Gentile. She was a Moabite woman. Yet, God chose her and used her to do great things. As a result, Christ comes from her lineage.

The Samaritan woman is another example. Christ sought out this scarred Gentile woman. She was in a part of the world that was seen as unclean. She was a broken vessel living in sin, but Christ spoke to her, confronted her sin, healed her, and used her in a mighty way.

His disciples weren't men of prominence. Instead they were lowly fishermen or even a despised tax collector, yet Christ called them, changed them, and used them in a mighty way.

So, why do we expect perfection from those around us? Why are Christian women so harsh toward one another?

When I finished my painting, it stood out from the others. The instructor loved it because I went "outside the box" and used my creativity. She loved that I did what others had not. And, as I walked around, I noticed that some had decided to make their paintings their own after they had seen what I had done.

"I didn't know we could do something different," asked that one attendee.
"Of course you can," I said. "That's what's so amazing about painting. You can express yourself."

It was fun to see how others had expressed themselves once they realized they could. 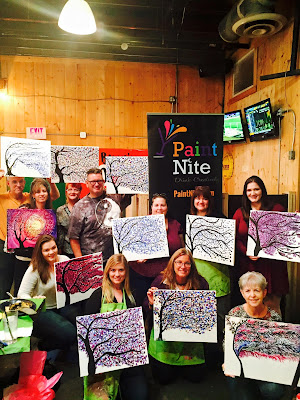 Instead of judging other women who aren't doing things the way you would do them (I know, How dare they, right??) encourage them. Use your uniqueness to encourage women.

Do you have a unique story to tell? Tell it to encourage women.

Do you have scars to reveal? Show them to encourage other women who may have scars, too.

Do you have gifts or talents that may be different than what others have? Use them to encourage others.

...complete my joy by being of the same mind, having the same love, being in full accord and of one mind. Do nothing from selfish ambition or conceit, but in humility count others more significant than yourselves. Let each of you look not only to his own interests, but also to the interests of others. Have this mind among yourselves, which is yours in Christ Jesus...

Aspire to have His mind.

Celebrate who you are in Christ. After all, He is the great artist...the divine designer who created you as one unique creation to be used by Him.

Now that's a work of art to celebrate!